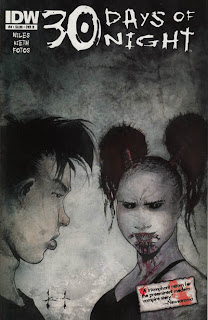 OK, I'm sure I'll get some heat on this one, but this cover just doesn't do it for me. Is it moody? Sure, in spades. But in terms of design, it just kind of sits there. Both elements are almost the same size for no reason. And what's up with the guy? Did someone slip him a ruffie? I mean, if this chick walked up on me, I'd be losing my shit, but our hero seems more annoyed at the situation. Again though, as I stated above, it just doesn't seem much  thought went into the design of this cover. I'd almost have rather seen just the vampire girl. 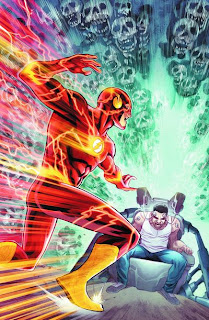 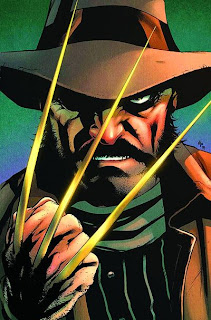 I don't mind a simple cover when it's done right, is rendered in an engaging way, or features a unique subject, such as the Moebius cover I talk about in cover "wins" this week. But seriously, how many covers can you do of a guy (usually Wolverine) holding up his fist with claws coming out before it becomes so hackneyed that it's a joke? Another example is Batman standing on the edge of a building next to a gargoyle. The artist needs to do something unique in order keep me from rolling my eyes, and saying, "Not again!" 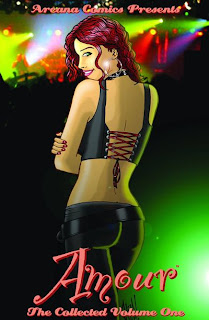 I can forgive the drawing and the coloring, but that photo background is criminal. First, I'll bet you dimes to dollars the artist didn't take it, and second, a cartoon style and photos mix about as well as ammonia and bleach. I did that once as a teenager working in a steak house thinking it would clean the floor even better and like this cover, it did NOT end well. 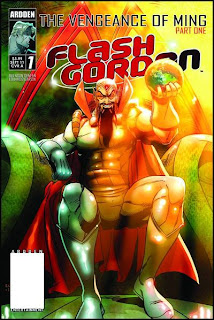 Beyond the crazy color job, this is on the list primarily because of the way Ming is sitting. Sitting is one of those things an artist needs to learn how to draw. What's funny is, it's one of the easiest things to take reference photos of. Think about it, chairs are readily available to most people on this planet. Maybe not in the Congo or a few other remote places, but I'm sure the artist was sitting on one when drawing this cover. Also, cameras with self-timers are super cheap. Even if you don't own one, a mirror is always an option. Bottom line, if you're drawing something out of your comfort zone, find reference.
Ming just doesn't look natural.

Well, that's another week down. I hope you guys still realize this are just my opinions I'm presenting here and nothing more.
Posted by Reverend Dave Johnson at 2:42 PM