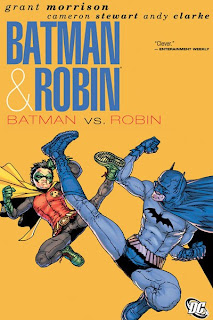 It all stems from a comment I made about this Batman & Robin cover where I said "OMG! Is this a parody of something? Way to keep those gay rumors at bay. Crotch shots are GO!" Well, if you assume I'm a homophobe, then just go ahead and assume that I think you're an idiot. Do you really know what that word means? I don't think you do. Maybe you should look it up. I neither fear gay people or have distain for them. That said, the main reason I talked about this cover being a "miss" for me beyond the "Ambiguously Gay Duo" vibe it's sending off it that the overall design is flat. It really doesn't look like any thought was put into the over all design. Just two characters jumping around.
Now I've heard someone say that it's a homage from something else, like a Street Fighter cover or something. I've got two problems with this. First, if it is, maybe a credit should have been included. And two, why would you re-do something that was lame to begin with? Unless of course this book is supposed to be a big joke.
Bottom line, I'm not a homophobe, and these are just opinions. If you're offended, guess what? Nobody ever died from being offended.

p.s. Just wanted to make it official on this blog. Frank Quitely is a fine artist. Those Bite Club covers he did back in the day are fantastic along with other newer work. And I'm sure he's a hell of guy. But as stated on Twitter, a lot of those Batman & Robin covers left me cold in a design sense. Like I said before, it's just my opinion.
Posted by Reverend Dave Johnson at 9:53 AM