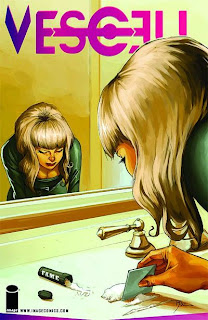 This is just a boring cover. It just doesn't feel designed at all, beyond, the artist just fulfilling the act of telling you the girl likes her cocaine. I mean, that should be obvious, because cocaine is awesome. (That's a joke kids, cocaine is *sniffffff* bad for you)
It lacks drama just from the flat layout.  This is what I call an "Interior panel" cover. Which in my book is always a big no-no. 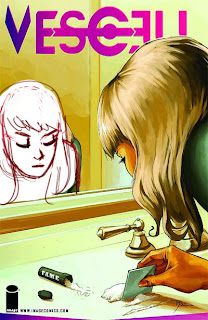 Also, the girls reflection is way off. The angle is wrong and she looks like she's in another room altogether. Or maybe she has a twin sister beside her about five feet back who also loves that sweet, sweet cocai...... sorry. 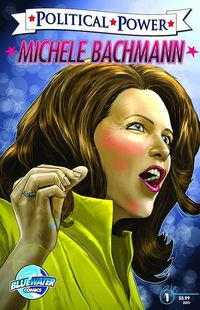 Ok, beyond the continuing mystery of who buys these celebrity comics (I'm assuming somebody does because they keep making them) is the issue of landing that likeness. Which, I have to confess I'm terrible at doing. So if you're going to be doing a cover based on a famous person, you better bring your A-game. If the publisher was smart, he'd go down to the park and hire one of those street caricature artists to do one. Plus they work really cheap. Seriously, some of those artists kick ass. 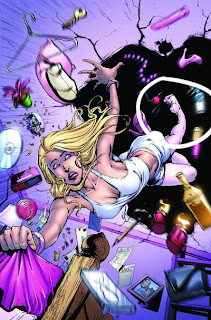 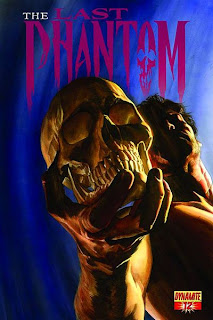 And lastly, we have Alex Ross's The Last Phantom cover. My main problem isn't Alex's fault, it's the logo. It's doesn't stand out at all. And to make matters worse, making "The" white really doesn't help the problem.

Well, that's it for another week. If I talked about your work, and I've hurt your feelings, I'm sorry. It's just my opinion. Karma will probably be kicking me in the ass soon enough.
Posted by Reverend Dave Johnson at 12:44 PM