Well, I'm catching some flak on the inter-tubes for my demeanor in my critiques of these covers. I guess they are butt hurt that I'm not super sweet in my delivery of bad news.  Well, get over it. Let me tell you story: I was 14 and just done a three page penciling sample that I was going to send to Marvel. But first, I had the chance to go to my first comic-book convention. Dick Giordano was a guest. Now, I hated DC comics at the time (I was a Marvel zombie then) but I figured I'd give this old man a thrill to behold my awesome talent. And when he would ultimately offer me a job on the spot (I was a bit idiotic back then/now) I would politely turn him down because Marvel was surely gonna hire me. Well, guess what, Dick ripped me a new asshole. He didn't spare any of my 14 year old feelings. And for a 2 weeks after, I couldn't walk right. But guess what? After that, everything he said made perfect sense and I forgot the harsh nature of the delivery. In other words, I got over it. And it made me a better artist.
That said, I will try to hold my sarcastic nature back as much as I can for all you sensitive types. But I'm sure you'll find something to bitch about regardless. 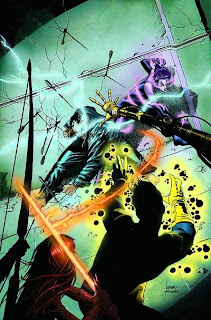 We start this week off with this one. The artist at least does things right by having the foreground characters in shadow to give it depth, but the coloring utterly destroys this cover. And all those special effects makes it almost unreadable. Its kind of a mess. 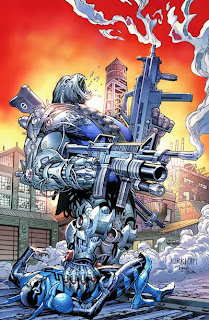 Let's see here. The colorist put the sun behind the characters, and shades them like it's not. Except for the red sky, all the color is kind of bland. 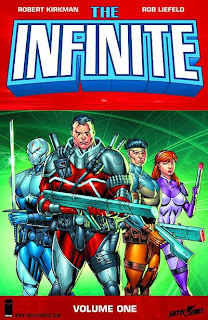 I'm only gonna talk about a few things that are structural in nature on this cover. One, the guy on the left looks like he's missing an arm. Two, the highlight on the dude's leg just right of the main guy reads as a space between his legs because it's almost the same color as the BG. So it makes one leg look like it's half the size of the other. Third, the main dudes cod piece looks like a limp dick. Or maybe it's erect. Depending on how you see things I guess (maybe I have the problem in the first place). Fourth, the girl is holding the gun so weird. It's so easy to go out, buy a toy gun, hold it in your hand for ref while drawing this kind of stuff. And finally, I say it all the time, but form follows function. If you're gonna have a strap (or 4 on one leg) on a costume, have it strapping something down. Also, does it make sense to have a traditional ammo clip on a laser? These are just pet peeves of mine.
Posted by Reverend Dave Johnson at 11:53 AM