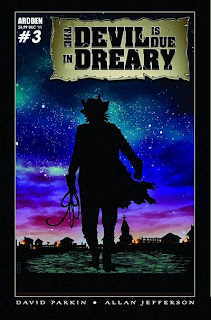 This really isn't a bad cover except for the "dreary" sky, which feels too over saturated and makes it hard to read the shadowed figure. My main beef is with the logo. It's just awful. It's got this torn-paper look that all the Image artists were using behind their signatures in the 90's, which would be okay if they hadn't raised it and made it look all metallic. Also, the type itself is just lousy. 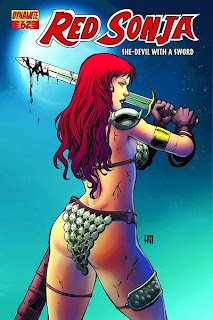 Here's how I imagine the discussion for this cover going....
Editor: Ok, we need a new Red Sonja cover, what ideas do we have people?
Artist: Umm, how about Red Sonja just showing us her ass while holding a sword?
Editor: GREAT CEASAR'S GHOST! That's BRILLIANT! How about she's surrounded by some evil vikings too?
Artist: How about instead, we put the moon behind her. But we make sure the light from it doesn't affect her what so ever?
Editor: Well, I guess. As long as we see her ass really well.
Artist: I'm on it chief. 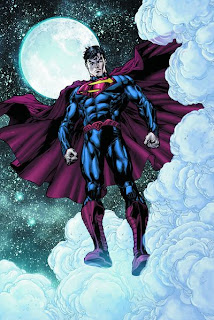 And speaking of moons, here's another one where the obvious light source is completely ignored. Think about how dramatic this cover could have been if the artist was brave enough to add some shadow to the main figure. Instead, we get an awkward and stiff pose. 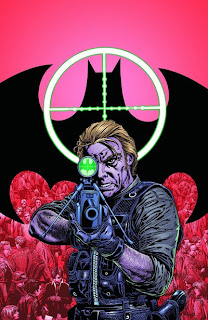 Once again, not a bad cover. So why is it on here? Well, it's the gun's bi-pod. One, it's attached to the scope, which is probably the worst place to attach one. Second, because of that, it only clears the bottom of the stock by a few inches. Seriously people, Google is AMAZING!!! It's got all the information you need on just about any subject you can think of. 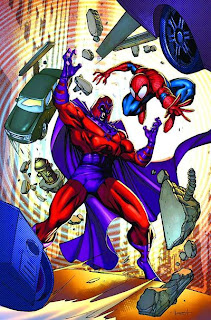 This is here because the ground does not match up with the background. Not only that, but if your style is even slightly cartoony, maybe a photo background is NOT the best course of action. I mean, it's not like there is that much background to put in any way. Hell, by being lazy, you just made the cover worse. 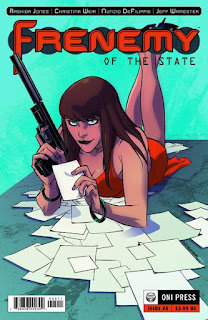 I get it. The artist loves the Pulp Fiction poster. We all do. But there are two things that make this cover come up on my radar. One, the background. It feels like she's just floating on a concrete slab in a tranquil blue/green neutral zone. And two, she's laying on a bunch of blank pieces of paper. Did the artist run out of time? Shouldn't there be something on them? Like photos of potential victims? Or documents? Hell, anything at all would do. But no, we just get blank sheets of paper. 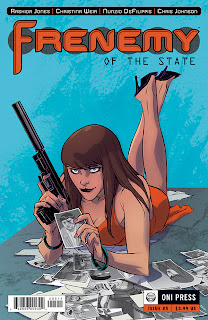 *EDIT* Well, let it never be said I'm not above admitting I made a mistake. Here's the actual printed cover with pictures in place of blank pieces of paper. To be fair, they didn't post that the cover posted for Previews was not the final cover. Well, it happens. My apologies to the artist. 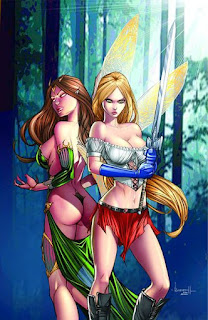 Okay, here we get another pin-up cover, *sigh*. Besides the girl in the front, whom I'm assuming is Power Girl of the Fairy Realm because of those costume colors and giant balloon titties, the main reason for calling out this cover is the chick behind her. Now let me get this straight. She has fabric that hangs BELOW her ass? Maybe in this fantasy world, the middle part of the back of one's legs is what really drives men mad with lust, and she being a modest girl likes to keep that shit locked up tight, as to not be considered a whore. Got it. Also, once again, a poor use of a photo background for the lazy artist. 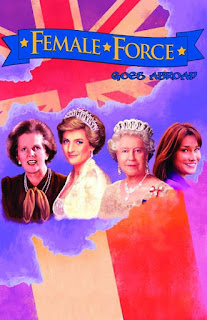