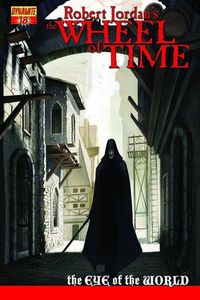 I talked about this cover before on twitter, but thought I'd make it official on this blog to show my appreciation of a job well done. It's just a fine illustration, with depth, mood, and atmosphere. Sometimes I squint my eyes to see if I can still make out shapes in an illustration. This one still reads, even with my eyes almost closed. 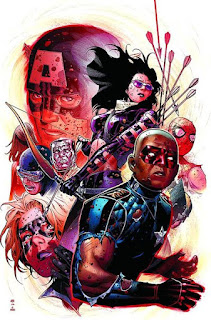 Montage covers are tough. All these separate elements fighting for your attention. Also, choosing which elements will be small, medium, and large, and in what layered order, so as to be less confusing to the eye. Really, the last thing you want is for the viewer to think one of the characters is a giant. This artist was pretty successful. The way the art is colored also helps set the priorities for what order the elements are stacked. My only beef is the arrow placement and the fact that the big-headed girl seems to be looking right at it. It's a bit distracting. 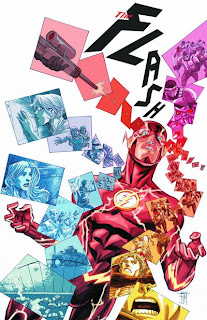 I really like this for many reasons. It's got great graphic design. It's tell's a story. The color is brilliant in the way it shifts. Also, the fact that it's still readable even with everything that's going on. Finally, playing with the Flash logo works well with the design. 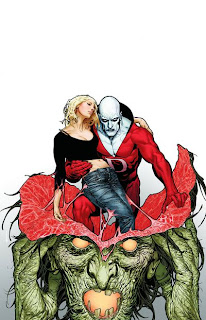 Man, Ryan Sook is an amazing artist. Anybody who can ape guys like Adam Hughes so well it's sometimes hard to tell the difference has my begrudging respect. But lately, he's been kinda doing his own thing, and I for one, am digging the hell out of the results. This cover... the red out of the green just pops against the white background. 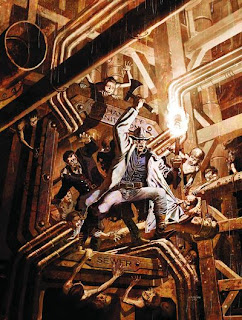 Speaking of guys who started out aping other artists...Landronn started out as a Kirby mimic, then a Moebius mimic (actually, he still is, but he's doing such a great job at it on those new Incal books it's hard to complain), but lately on the covers he's been doing for DC, his style is really starting to come out. I mean, this cover is just so well done. There's so much to look at, but it never loses focus on what's important, that being Jonah Hex. 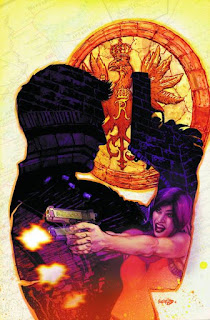 And finally, I gotta give some love to my old studio mate, Tony Harris. Simple, easily readable silhouette, interesting graphic element behind him, and action inside. I also dig the color choices and how they shift. Overall, simple, but effective.
Posted by Reverend Dave Johnson at 12:39 PM