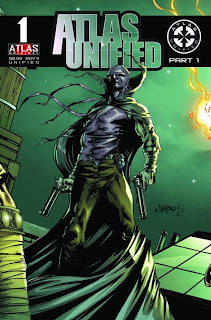 This cover is part of a tryptic so I'll refrain from talking about the design, but what bugs me is the cape. I have to blame McFarlane for this trend. Ever since Spawn, it's just gotten ridiculous. My favoring cover was when he drew Spawn crouching on his own cape. Assuring once Spawn tried to stand up, he's choke himself out. Just google Spawn #8. Anyway, back to this cover. Maybe his character is all about bloody vengeance and providing a never ending supply of fabric to wayward clothing designers. 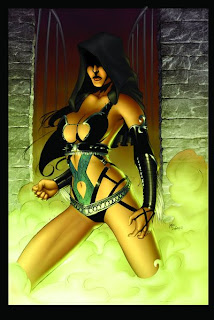 Hey, look at that. This character and the Cape guy above are almost in the same position. But I digress. There is so many things wrong with this cover. First off, the pose. It's that standard "Image Comics from the 90's, look at me, I'm a bad ass" kind of thing that has been done sooooo many times if I didn't know any better I'd swear this is a parody of those covers. Then there is the design. Why is it off-set? If you're going to do a boring straight on cover with matching elements on each side, at least have them balanced. I don't have OCD, but if I did, this cover would drive me crazy. And now onto color. Besides the airbrush nature of it (which I'm not a fan of, but I'm trying to stay away from those kind of comments. Some people dig this style of art. I get it.) is the green highlights that seem to appear in some places but not others. And the fact that her cloak on her head completely disappears into the BG. And one last note on the design side of things. Her costume is horrible. Throwing a bunch of random elements on a figure is not good design. Maybe the artist should start watching "Project Runway". 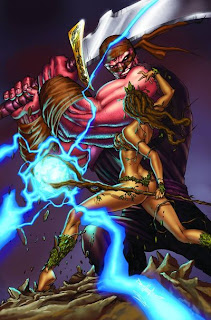 This is another cover with that airbrushy with crazy highlights flavor to it. Once again, not my cup of tea, but what I will talk about the terrible color choices. It offends my eyes. The purples, the pinks, with gold and silver and blues oh my! All together they make this look like mud. Design wise, well, there really isn't any. Once again, it feels like an interior panel. I'm not even sure who the main character is? I think this artist needs a good solid dose of "How to draw comics the Marvel way". John Buscema shows you how to do "2 characters fighting" covers the right way. 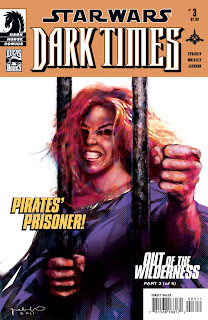 And finally we come to this cover depicting the worst jail in the Star Wars universe. That chick is probably yelling, "Damn you for locking me up in this prison cell with only two bars. If only I could figure out how to walk around them!" Also, I'm not really sure what's going on with her dress. It's like two different artists did this piece. One who wants to be a painter and the other who had a bunch of old zip-a-tone laying around.
Posted by Reverend Dave Johnson at 10:56 AM